Once the UK leaves the European Union (EU), a new immigration system will be introduced to replace the EU’s freedom of movement rule. The government favours a “points-based system” which can take different factors like skills and language into account when awarding visas.

Taking control of immigration was one of the key themes of the Leave campaign in the 2016 referendum. 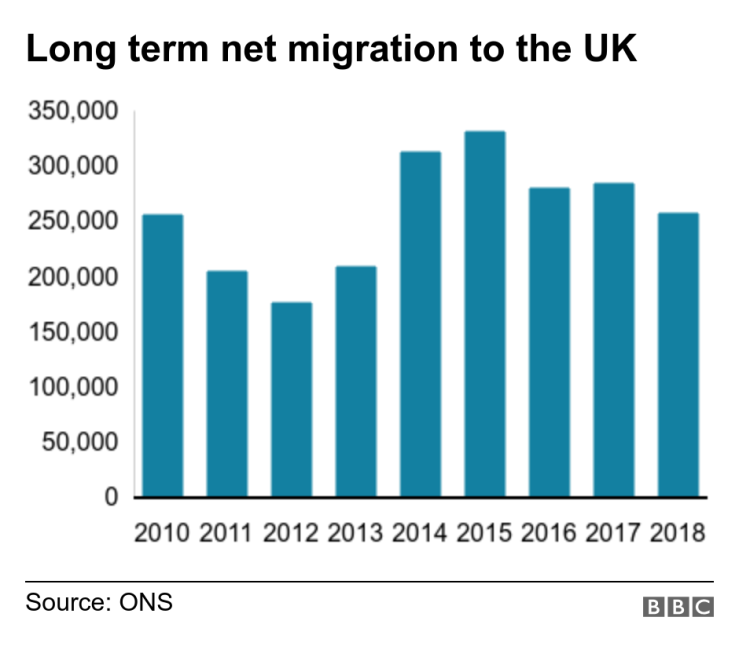 Currently, those from within the EU do not need a visa to work in the UK because they benefit from “freedom of movement” – although there are limits on claiming certain benefits.

For those from outside the EU, there is a system in place based on points.

Points-based immigration systems assign points for specific skills, salaries or professions. Visas are awarded to people who gain enough points to take them above a certain threshold.

In the UK these points are awarded for having English language skills, being sponsored by a company and meeting a salary threshold.

A maximum number of work visas are awarded – the cap is set at around 21,000 a year but isn’t often met.

There are four “tiers” of visa assessed on points. There are a few other types of visa available, with different rules, for example family visas for the spouses and relatives of people coming on work visas.

The four visas are for:

Why do people keep talking about Australia?

Australia is the country often given as an example by politicians, although Canada and New Zealand also have points-based systems.

They have a lot of similarities to the system the UK uses for non-EU migrants, although each system awards different numbers of points for different things.

What do we know about the UK’s system after Brexit?

The government’s expert advisors, the Migration Advisory Committee, have recommended that the minimum salary for the admittance of a skilled worker from anywhere in the world, including EU nations, should be £25,600 – down from the current £30,000 for non-EU migrants.

The last government set out plans for a post-Brexit immigration system in which skilled EU workers with a minimum salary of £30,000 would need to be sponsored by an employer. They would be able to bring dependants with them and there would be no cap on their numbers.

A scheme for lower-skilled workers to come to the UK, on visas limited to 12 months, was also planned.

This government has yet to announce the final shape of the future immigration system, and pass it into law.

Boris Johnson has already announced a “global talent” visa which will replace the current “exceptional talent” route, but removing the cap on numbers. Currently there are 2,000 of these visas available a year and the cap is rarely reached.

The government will consider recommendations from the Migration Advisory Committee published on 28 January.